The awesome people over at Good Books and Good Wine came up with the fabulous 15 Day Book Blogger Challenge!

Today’s Challenge is: Describe one underappreciated book EVERYONE should read.

There are SO many books to choose from for this challenge (as I’m sure all the bloggers participating in this one are saying) so it is very difficult to just pick one, but I’ll go with the first one that came to mind. The book is Thief by Sarah-Jane Lehoux which you can pick up from Amazon for only 99 cents!

Thief is primarily a fantasy book. 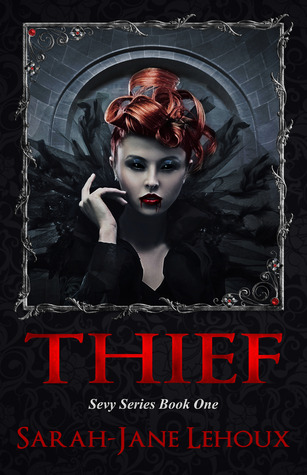 You see elves featured a decent amount, though the dark elves are arguably cooler than their light counterparts if you ask me. There are also goddesses and pixies as well as a variety of other lesser used creatures which you’ll have to find out more about by reading the book.

Thief is headlined by Sevy, a kick-ass heroine who is easily one of my favorite characters in any book I’ve ever read. She’s that classic bad-ass on the outside and softie/sweetheart on the inside, but don’t let her know I told you that. She started from nothing, literally growing up on the streets and was stealing to get by until she runs into the other main character, Jarro. Picture your typical nice guy in your head, that’s Jarro, only he’s a gang leader. How does a guy like that end up in a gang? You’ll have to read the book to find out! I’m such a tease. ^.^

The book is action packed with displays of the fantastic, battles, rescues and grand adventures, the book has it all. There are also elements of romance that fuel a lot of the book’s plot but it melds perfectly with the rest of the story. Pain and loss are acutely felt by the reader, or at least by me, and the desire to see Sevy reach a “happily ever after” becomes just as big of a drive for us as it is for Sevy and the other characters in Thief.

I can’t say much more without spoiling major bits of the book so I’ll just say that I loved it and you should definitely read it. Fantasy fans this is a must read for you. Action junkies you too. Oh and sweet romance lovers make sure to check it out as well. Really just anyone who loves a good book needs to read Thief. What underappreciated book should I check out that you love? Why is it so amazing? Thanks as always for reading! ^.^

I was fortunate enough to be given a PDF copy of Thief by Sarah-Jane Lehoux in exchange for a review. So without further ado, my thoughts on Thief!

Thief follows Sevy, a young homeless girl trying to survive by, you guessed it, stealing. Sevy lives in Eloria, a stinking pit of a city inhabited by homeless kids such as herself, prostitutes and gangs. Sevy encounters one of the gang leaders, a young man named Jarro, and after some protesting on his part she is allowed to join his group. Sevy quickly falls in love with Jarro, but just when it seems that he might feel the same way he is mysteriously murdered. Furious, Sevy will stop at nothing to find out who murdered him and make them pay, but when she finds that his murderer is her only hope at possibly having her beloved Jarro back will she be able to go through with her plan, or will she risk everything including her best friend for a chance at happiness that she’s never known?

Thief has everything you can possibly want in a fantasy book, from elves and dark elves, to pixies and goddesses your hunger for the supernatural and divine will be more than satiated. Thief is also high on action, with the story rarely slowing down you will be hard-pressed to stop reading even for a minute as you wait for the next breathtaking scene to follow. For those of you who like some romance thrown in with your fantasy fear not, Thief is centered on the growing love between Sevy and Jarro that is intricate and truly beautiful. There is also plenty of violence if that’s more your cup of tea, so as you can see there is something in Thief for everyone!

I loved Thief! It’s been a while since I have been able to breeze through a book so quickly while simultaneously wanting to linger on the best parts as the story grips me and forces me into Sevy’s world. I was easily able to identify with the characters, especially that of Sevy, and I could feel her pain and her loss when Jarro was murdered, so much so that I was actually angry at the author for doing that to her! You know that you’ve really melded with the story when you are compelled to go berate the author because of an act within the book, and I was certainly so compelled multiple times while reading Thief, not because I wasn’t enjoying the book, but because the pain Sevy and the other characters in Thief felt was so very real to me. The characters were beautifully detailed and their emotions wonderfully displayed by the exquisite writing throughout the book.

Another thing that was done very well in Thief was the clean transitions between the points of view of the characters. There were obvious divides and it never felt like I was losing perspective as I entered into another character’s consciousness. As each character’s emotions were made more clear by seeing things from their point of view it enriched the story and enhanced it, strengthening the connection between the reader and this world.

Though the direction the plot went had me screaming in frustration along with Sevy, and feeling her deep sadness as well, it was very well done. I thoroughly enjoyed Thief and am very excited to dive into Shades of War. The ending of Thief was unexpected and I was just as shocked as the characters within as to how it unfolded. This for me is a must read, I recommend it to fantasy lovers in particular, but also to any reader who enjoys a wonderful story.

Complaints: Why did Jarro have to die darn you Sarah-Jane! I’m kidding, if anything I only wished it was longer so I could have enjoyed even more of Sevy’s world. 🙂