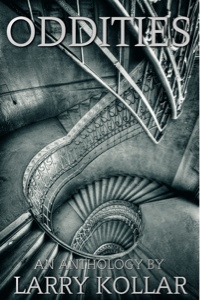 An odd little anthology of flash fiction and short stories, for those who love fantasy and science fiction.

Today was the release day of Oddities by the always amazing and entertaining Larry Kollar so I thought it only fitting that I review it today! You can get it from Amazon here for only 99 cents! Oddities is separated into two halves, the first made up of fantasy stories, the latter science fiction, both with one entertaining story after another. As usual with anthologies I will do a list, this time of my five favorites with a little about them and why I enjoyed the stories. So without further ado, my top 5, in reverse order of course:

5. Siren in Training – It’s exactly what the title would suggest, a short story about a young girl that happens to be a siren. She just finds this out at fourteen and after finally accepting of her new powers puts them to use. These powers do have some limitations and some…side effects on her life that are a nice twist on the usual siren story. A funny little story, quite enjoyable.

4. The Seventh Sage – A story that shows nothing is as it might seem. Great warriors can become great scholars if the path they choose dictates they must. The message seems to be that the greatest rewards are those that you are not even searching for, but find naturally. A more deep-thinking story, but enjoyable.

3. Bait – Another sci-fi story as well as being yet another humorous entry, Bait is about a world where humans live but are under the power of aliens, apparently which like to fish. While the aliens have a different objective, the humans believe they do so to capture them. However, the only currency remaining is obtained by risking this capture. The ending is the selling point for Bait and definitely made me chuckle as it was a pretty good comparison for how humans often assume they know what the other people are thinking when the reality is quite different. If we take Bait as words of wisdom it would be to work on communicating more clearly with other cultures and thus bring us closer together.

2. Spark – One of the science fiction stories, Spark is another one that causes some deeper thinking. In this case the story examines our dependence on technology as well as the virtual reality that so many of us lose ourselves in. It asks us what we might lose in exchange for the way we are spending our lives and whether we are willing to pay the price. Will we risk losing our spark? I loved this one, it brings up quite the quandary.

1. Asmus and the Dragon – Filled with both subtle humor (the name of a certain land Asmus, the main character, traveled to was rather funny in a punny way) as well as the downright hilarious (two words: allergic. dragon.) this story was fabulous. Though one of the shorter ones it had me laughing throughout and my only wish is that it had been longer. Besides, who can resist a good dragon story?