The Books, Brains ‘n Blood Readathon is hosted by the lovely people over at My Shelf Confessions from August 2nd to August 6th. It doesn’t look like there are any “theme” requirements for books, but I saved some creepy reads just for the occasion. If you would like to sign up, and you know you would, just click on the lovely picture above and join in on the fun! As usual my list of possible reads and stats are below!

Something Strange and Deadly by Susan Dennard

Every Other Day by Jennifer Lynn Barnes

Shadow and Bone by Leigh Bardugo

The Nightmare Affair by Mindee Arnett

Fungus of the Heart by Jeremy C. Shipp

Dace and Jasyn have everything they ever wanted – their own trading ship and freedom.

Their only issue, regulations require a second pilot and the only one available on Viya Station is a little too perfect for Dace’s comfort. But his credentials check out and everything seems fine.

Until Dace disappears and Jasyn learns the truth.

I received an e-book copy of Poisoned Pawn in exchange for an honest review.

I’m really excited for this post since it was scheduled on the release day of Poisoned Pawn! Go get yourself a copy and thank me later!

Poisoned Pawn, the third book in the fantastic Altairan Empire series, is filled with just as much action, adventure and witty banter (my personal favorite part) as the previous books. The strength of this series has always been its characters. Clegg does a masterful job in giving them each their own distinct and truly enjoyable personalities despite the difficult task of using multiple points of view. From reading so much this year I can’t stress enough what a feat it is to do that and have the characters be instantly lovable, whether you start the series from the beginning (which I recommend) or jump right into Poisoned Pawn. Dace is a wonderful main character, in my favorite kick-butt heroine mold but with a few quirks that separate her and make her unique. She’s tough and you want her on your side in a fight, but she isn’t invulnerable which makes her easy to relate too and seem more realistic. All positives.

The new recruit, Clark, is excellent and might even be my favorite. He plays his role very well and has personality and a sense of humor in excess but manages to turn on the “hero” mode in a flash (pardon the obvious superhero pun, I couldn’t help it). He doesn’t do as good of a job as he thinks he does keeping his feelings in check all the time, but he is very loyal to those he befriends. I’d love to break down his character more, especially with him being a new one, but I don’t want to give anything away. (River Song Voice – Spoilers!)

The plot is teeming with action, danger, scheming and everything else you can possibly think of. With the addition of Poisoned Pawn to the series Clegg has established herself as one of the best writers in the Space Opera genre. Don’t know what Space Opera is? Make sure to check out her guest post here! I loved Poisoned Pawns and the only thing keeping me from gushing on about how much I do is needing to be up at 3:30am, sorry! Definitely go check it out for yourself, you will be glad that you did, and thanks for reading!

I am thrilled to have author Jaleta Clegg come on the blog today to talk about Space Opera! First a little bit about the lovely lady: 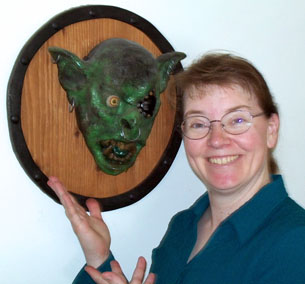 Jaleta Clegg loves twisting words into adventures. She loves space and astronomy, too. What better way to blend the two than to write science fiction adventure stories? She also dabbles in silly horror and fantasy stories. Her poetry is bad enough to kill a Vogon, though, so you won’t find that anywhere but hidden in her deepest drawer. She enjoys creating things with yarn and a crochet hook, most of them monsters or variations of Cthulhu but occasionally they’re normal things like hats or blankets. She likes to cook most days. One of her favorite grocery games is “stump the checker” – find the weirdest vegetable or fruit they sell and see if the checker can identify it to ring it up. It also helps if you know how to cook the thing, too, which she does. Her blog features recipes every Thursday and random posts on Mondays. Check it out at jaletaclegg.blogspot.com. Find her stories at http://www.jaletac.com and her space opera series at http://www.altairanempire.com (She also thinks it’s silly to write about herself in third person, but recognizes that it is sometimes a necessary conceit.)

I don’t want to keep you from her awesomeness so let’s get right into it!

When I tell people I write space opera, I tend to get blank stares. “What’s that?” they ask, or worse, “Is that like soap operas?” usually delivered with a curled lip. Lately I’ve been telling people I write science fiction adventure.

So what is space opera? From Wikipedia (http://en.wikipedia.org/wiki/Space_opera), that source of all knowledge both true and speculative, “Space opera is a subgenre of science fiction that emphasizes romantic, often melodramatic adventure, set mainly or entirely in outer space, usually involving conflict between opponents possessing advanced technologies and abilities. The term has no relation to music and it is analogous to “soap opera“. Perhaps the most significant trait of space opera is that settings, characters, battles, powers, and themes tend to be very large-scale.”

The Fall of the Altairan Empire series (www.altairanempire.com) was written as entertainment. It doesn’t aspire to be more than just a good story. If you’re looking for an exploration of the deep inner meaning of artificial intelligence or the cosmos, read something defined as hard SF. My books fall squarely under the “beach-read” category. If they have deep inner meaning to you, I’d love to hear about it. They have deep meaning to me, but that’s because I’ve been living with these characters and situations in my head for a couple of decades now.

My favorite books and movies tend to fall under the space opera umbrella, just like the ones I’ve written. Flash Gordon will always have a special place in my heart. Spacehunter in the Forbidden Zone is one of my all-time favorite movies, especially when it ISN’T 3D. Buck Rogers, especially the cheesy 70s tv show with the silly costumes, will always have a place on my shelves. The space tales of the Solar Queen are some of my favorites of Andre Norton’s many books. Elizabeth Moon’s Vatta’s War series is another great space opera series. Tell me my books remind you of the golden age science fiction stories or they remind you of an Andre Norton tale, and I will love you forever. That was exactly what I set out to create.

So how does today’s space opera differ from today’s science fiction? Most of the science fiction I’ve picked up lately was very bleak and depressing. It dealt with dystopias – societies that were repressive and dysfunctional. I had to read Orwell’s 1984 in high school. It reminds me of that. I prefer my future to be better than our present. I want it bright and happy. I want hope. The original Star Trek series delivered that in spades, including the bright happy sixties colors. Purple, orange, lime green, yellow – all on the same screen at the same time. Was it always happy? No. Was it always perfect? No. But they delivered a future that had possibilities. They delivered a future I wanted to be part of. The current crop of ugly futures are not where I want to be. Ever. Space opera tends to focus on broad sweeping stories that deliver a better future, a place where hope lives.

So if you’re looking for that kind of future, where heroes can happen, where evil can be defeated, where life can be better, try my books. Nexus Point is exactly that – a beginning point, a nexus of situations and people that collide into a bigger story. Priestess of the Eggstone continues building on the events of Nexus Point. Poisoned Pawn introduces more characters, both good and bad. I’ve got eight more of these books coming. The Kumadai Run is in edits. The rest are written, waiting their turn.

And if you hate it when an author with a long series keeps leaving you hanging off the edge of a cliff at the end of each book, I hate that, too. Each of my books is a complete story that will build into an even larger story through the series. I don’t leave readers dangling. At least not too much.

I hope you enjoyed this guest post as much as I did and make sure to come back tomorrow as I review Jaleta Clegg’s newest book, Poisoned Pawn, which is set to release tomorrow! Make sure to check out her books by clicking on the pictures above! ^.^ Thanks as always for reading!