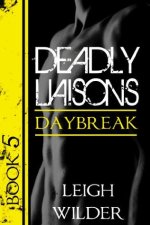 Both Jamie-boy and Damian have suffered since their break-up, but they are thrown together when a vampire is brutally murdered. Damian is too depressed to care and ready to let the cops deal with it–Jamie-boy is willing to do some investigating on his own.

Then there’s Lucas, a vamp tramp with a Daybreaker’s tattoo on his neck. Whose side is he on? How many people is he willing to hurt to get what he wants?

Daybreak is book 5 in the Deadly Liaisons series, one that I’ve enjoyed quite a bit, and this entry didn’t disappoint. Where the first four books focused on the points of view of Jamie-boy and Damian, Daybreak also takes a look at things from the POV of newcomer Lucas. It gives a refreshing new voice and perspective to the series, seeing things from outside of Damian’s immediate influence, and giving us a closer look at the Daybreakers aka the anti-vampire group.

However, the MCs are still in control of some of the action, and for much of the story in a bit of a role reversal. Damian shows that even an older vampire can be pretty childish when hurt, drinking and sulking around his room, and seeing Jamie-boy briefly at a crime scene doesn’t help.

Then there is the normally shy and subservient Jamie-boy acting tough, going to investigate in hostile territory where he could get himself killed, and messing around with Lucas who he barely knows. He keeps himself busy and involved to show Damian that he can be of help without him, and to keep his mind off their uncertain relationship.

With the additional POV there weren’t a whole lot of surprises until the very end, but it still worked out pretty well. There was plenty of action, a solid amount of drama, and great character development. The ending leaves a lot of arcs up in the air, and that is the way I like it in this case. I can’t wait to find out what’s coming next! For anyone looking for some well written M/M I’d certainly recommend this series. As always, thanks for reading. ^.^