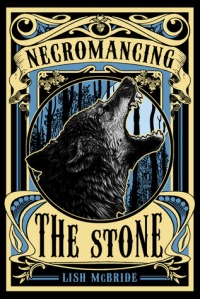 Summary from Goodreads: With the defeat of the evil Douglas behind him, Sam LaCroix is getting used to his new life. Okay, so he hadn’t exactly planned on being a powerful necromancer with a seat on the local magical council and a capricious werewolf sort-of-girlfriend, but things are going fine, right?

Well . . . not really. He’s pretty tired of getting beat up by everyone and their mother, for one thing, and he can’t help but feel that his new house hates him. His best friend is a werebear, someone is threatening his sister, and while Sam realizes that he himself has a lot of power at his fingertips, he’s not exactly sure how to use it. Which, he has to admit, is a bit disconcerting.

But when everything starts falling apart, he decides it’s time to step up and take control. His attempts to do so just bring up more questions, though, the most important of which is more than a little alarming: Is Douglas really dead?

When I finished reading Hold Me Closer, Necromancer, which is also by Lish McBride, I was incredibly thankful that I had Necromancing the Stone already so I didn’t have to wait to dive into the next part of this awesome journey. Necromancing the Stone, unlike its predecessor, delves into a more somber and serious part of Sam’s life. There are still plenty of jokes and fantastic lines (and freaking awesome chapter titles!) throughout, but the story itself doesn’t have nearly as light of a feel to it. Despite that fact I thoroughly enjoyed Necromancing the Stone. The writing was excellent, the characters excellently hashed out and developed, and the plot moved along at a comfortable pace while allowing for some side stories to emerge. New types of beings were brought into the story and served to enrich the already beautiful world that McBride created.

As of right now I do not know if there will be a third book in this series, but there were enough loose ends where another entry could certainly be warranted (and in my case welcomed with open arms). However, the major conflict was definitely resolved and it was done so masterfully. I don’t want to spoil the book for anyone who hasn’t read it yet, but I was quite satisfied (and a bit relieved) by how McBride decided to move forward.

The world that is continued in Necromancing the Stone seems to go back and forth between showing how all of the differences these characters (and types of beings) accentuate the world as a whole, and simultaneously making fun of itself. There are mischief makers and beings of great power that hearken back to civilizations that are long gone (and often forgotten). It is a combination that is not easily done but that, in this case to me, seemed to be flawless. I loved the references to various cultures and deities, some of which are not very well known, giving the book a feel of realism and weight that Hold Me Closer, Necromancer didn’t have.

Overall, as this rambling session has clearly expressed, I loved Necromancing the Stone. I hope that McBride does indeed write a third book and that we are lucky enough to see even more depth drawn out of the plethora of characters that I have come to know and love. I encourage any book lover to pick this up as well as Hold Me Closer, Necromancer, they are fantastic books and must reads in my (humble) opinion. Thank you as always for reading this and I’ll see you tomorrow for book #2 in 2013! 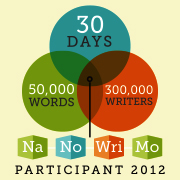 Wow, that was an amazing first day! Whether I was participating in sprints on twitter or word wars in hangouts on Google with fellow NaNos it was a day absolutely full of writing. For those who don’t remember the daily goal for NaNoWriMo is 1,667 words. Through sheer insanity and disregard for all else but writing I wrote 17,546 words. 17,546! That’s over 1/3 of the whole goal! O.O I honestly have no clue how I churned out so many but it was so much fun doing so. The words were flying out and though there will be an insane amount of editing that needs to be done before I’d ever let anyone else even glimpse at it I think I actually wrote rather well.

I’m excited for day two! I’m not sure how much writing I will do today though it definitely will not be on par with day one, that was just crazy excitement and not doing ANYTHING besides writing for almost the entire day. I will try to get in a few thousand words though so we shall see. ^.^ Let me know if you are participating and if so how you are doing so far!

Also, if you follow my blog regularly then you know that I was supposed to have a review up yesterday. I’m sorry! NaNoWriMo madness overtook me! During this month my posts may be a bit more erratic outside of the daily NaNo updates which I promise I will do. I will still participate in my usual memes (Stacking the Shelves, Sunday Post and Waiting on Wednesday) but the reviews will mostly be whenever I can get to them. So some days you will just have the NaNo update and others you might have that, a meme AND a review! It’ll be fun I swear. ^.^ Thank you so much for your patience while I try this novel writing thing out. I really do appreciate it as well as all the support I have received thus far, it means so much. 🙂

This is my first time participating in the awesomeness that is National Novel Writing Month or NaNoWriMo and I’m really excited for it! As the picture above says the goal of NaNoWriMo, outside of just writing as much as you can to create a novel, is to write 50,000+ words in the 30 days in the month of November. You don’t have to write that much but if you do hit 50,000 in the 30 days then you “win”. That averages out to at least 1,667 words per day which for some sounds like a daunting task. Initially I was worried about trying to complete this monumental task but I did a little test writing just to see how I’d do and I don’t think I’ll have too big of an issue hitting that 50,000 mark sometime this month. If any of you would like to sign up just click the link above, it is very easy, don’t worry that it has already started, it’s early!

I will be doing a post each day about how my progress is going though some will likely be relatively short and just giving you a general gist of my morale and word count. For me the most fun is interacting with all of the other people that are participating on the NaNoWriMo site, blogs and twitter especially. Don’t get me wrong, I can’t wait to test my capability to write something of this length, but it is that time with all of the other amazing people that I cherish. If you want to add me as a “buddy” on the site you can search for me under frodosco.

I will say that this particular thing that I am writing is a bit on the personal side so I won’t be sharing excerpts or anything of that nature. The only way that I would share anything from a novel is if I start a second one if I finish early which isn’t likely though I have considered the possibility. I encourage you to sign up if you haven’t and if you have make sure to have fun! There are so many amazing activities to partake in, word wars and word sprints to test yourself, and depending on your area ways to hang out with your fellow NaNos. ^.^ For those who don’t know, I am in the Minneapolis, Minnesota, USA area of the world so if I do any events that is where they will be, but there are ones all over the place so check to see what is going on in your area!

Thank you for listening to my babble, I can’t wait to get started! I’ve got snacks ready, caffeine for fuel and a passion to get this particular novel out of my system and onto paper, or at least a microsoft word document. To all that have signed up, good luck! 🙂