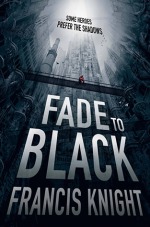 From the depths of a valley rises the city of Mahala.

It’s a city built upwards, not across—where streets are built upon streets, buildings upon buildings. A city that the Ministry rules from the sunlit summit, and where the forsaken lurk in the darkness of Under.

Rojan Dizon doesn’t mind staying in the shadows, because he’s got things to hide. Things like being a pain-mage, with the forbidden power to draw magic from pain. But he can’t hide for ever.

Because when Rojan stumbles upon the secrets lurking in the depths of the Pit, the fate of Mahala will depend on him using his magic. And unlucky for Rojan—this is going to hurt.

When I decided to buy Fade to Black it was for a few reasons; I really liked the cover, the idea of the city built upward to a greater extent then even what we have today outside of perhaps some Asian countries, but most of all I thought this would be a really interesting and fast-paced action story with some magical elements. I certainly got what I bargained for with the first two areas, the cover is still a really nice design and looks great on my shelf, and the descriptions of the city were excellent and gave me a vivid depiction in my head as I went through the adventure.

However, the aspect I had been looking forward to most, the action story with magical powers, was not quite what I had in mind. I knew with a title like Fade to Black that the odds were this story would have a darker edge to it, and I was actually quite pleased to find that was the case, but it was the action parts that were somewhat lacking.

The beginning of the story is very slow and Knight is incredibly methodical in how he sets up the later stages, and while he does a good job in foreshadowing, there is almost too much build up and not enough substance to keep me going save for my desire to see where this went based on my feelings prior to reading. The characters are somewhat interesting and the world itself is certainly intriguing and I wanted to know more, but I didn’t feel a tie to anything that was going on. Simply put, I had very little emotional investment for the first third of the book or so.

Rather than having the reader organically develop feelings and connections with the characters as they go along, it seemed like Knight felt or understood that there was little there to create any empathy, and so instead they threw a very disturbing and gut-wrenching scene in and figured that would do the trick. I can’t say that it did, all it achieved was ensuring what I already had assumed, this book is dark at its core.

While it may seem like I didn’t like Fade to Black, and for quite a while that was the case, toward the latter half of the book I did finally connect with some of the characters and when the action picked up I was swept up and brought along for the ride. The displays of magic near the end of the story were great and the tension was very real and impactful. The romantic aspects as well as the fear and hope concerning the people of the Pit were excellent and their agony became my own.

“What about the main characters?” you might ask. Rojan is kind of a sleaze-ball, and only the horrible things he sees first hand were able to bring any kind of good character out of him, but he sticks to character and there is something to be said for that even if he isn’t someone you really root for or like. Jake is a traumatized woman who turned to weapons and the classic icy exterior in order to cope. She also has the stereotypical softer core, but I guess there are stereotypes for a reason because it works for the most part.

Pasha is the last “main” character, but I don’t want to say too much about him because it would give a lot away. Unfortunately, Pasha does bring the religious undercurrent that permeates the book, and not in the best of ways either. I couldn’t tell if Knight was on a particular side when it came to that, and maybe there wasn’t a specific religious message given, but the way it was done felt slimy and not at all satisfying (Lion King anyone?).

Overall the book was alright, but nowhere near meeting my expectations for it. The beginning was too slow, the characters too often were stereotypes and cliches and little else, and by the time the action and magical elements picked up most readers will probably have checked out from boredom or the seedier bits that weren’t expressed in the summary. It isn’t one that I would recommend, but not a “don’t read” either. Thanks as always for reading. 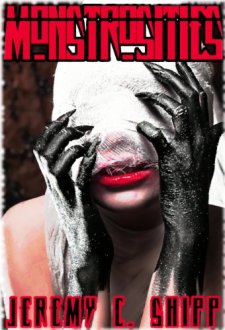 A man with clown heads for hands. A city full of shape-shifting worms. A Cinderella story that ends with slaughter. These are just some of the monstrosities you’ll encounter in this horror collection by Bram Stoker Award Nominee Jeremy C. Shipp.

Jeremy C. Shipp is one of my favorite authors and is on the short list for my auto-buy authors. As such it was no surprise that I really enjoyed this collection of short stories as I have all his others. There are 10 short stories in Monstrosities but I will focus on my five favorites, sound good? Let’s get into it!

The Tunnel: This piece is insane and intense. It’s thought provoking with an ending that sums everything up perfectly but is one I never saw coming. It’s frightening because it reveals how far we go to escape our reality no matter what we might lose. In the end our choices will make us who we are, defining us. A simple truth, yes, but an important one.

Worms: Shipp continues one of the darker collections I’ve read by him with Worms. Loss, reality crushing imagination, good intentions proven useless as grief overwhelms all else. While it may not be a long piece it packs plenty of emotion into the story and is extremely powerful.

The Little Glass Soul: With dark and sardonic humor on full display, The Little Glass Soul is a little bit of Cinderella mixed with some Snow White and twisted into a horrifying display of cruelty. The ending is very satisfying and I really liked Shipp’s take on the fairy tale, only he would alter it this way.

Clown Hands: This is the piece that shows off Shipp’s writing style the best. It’s reminiscent of his Attic Clowns stories, which I loved, and shows the darker/twisted inner thoughts of humans being forced to the outside. It reveals that human nature that we would prefer to keep hidden while keeping the humor flowing throughout the story. It’s a bit silly and that’s why it works so well. Loved this one. More clowns please!

Buried: Using smooth transitions and beautiful insight into the human mind, Buried shows how a different perspective can change everything. One person sees a murderer and thinks them unfit to live while that same person might commit crimes just as heinous and view themselves as the righteous one. Who is worthy to live? Is anyone? Or all we all excess? Fantastic story and a superb ending.

Overall I really enjoyed Jeremy C. Shipp’s latest anthology. There were a couple familiar tales for fans of his other work (Googly from Attic Toys and Figs from Here Be Monsters) mixed in with plenty of brand new hilarious and horrific stories. Monstrosities is a darker and edgier collection than Shipp’s previous ones as well as being more thought provoking. Shipp delves into the human mind farther than ever before with great (if creepy) results. You may not want to accept the truth as Shipp sees it, but it is hard to deny its validity. A must read for horror and humor fans. Thanks as always for reading! ^.^