The Photographer’s Muse by Dominic Rod 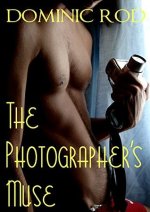 Nick lives a solitary existence in NYC. Invisible. Alone. Until a photographer walks up to him in the park one day and asks to take his picture.

Esteban lives in a world of art, sex, and domination. Nick is introduced to this world and he falls in love with it…and Esteban.

The Photographer’s Muse is another solid entry from one of my favorite erotica sources, Luna Erotica, and it came with the writing level that I expect from them. The pacing is a bit quick, and the MC Nick does a serious 180 in terms of how he sees himself, but that doesn’t stop it from being an exciting journey of sexual discovery, as well of that of the self. I imagine that for some people The Photographer’s Muse would accurately depict how they came to find out whatever sexual preference they really had, or at least their first sexual experience in the new-found territory; slow realization, then incredible desire all at once.

Both Jamie-boy and Damian have suffered since their break-up, but they are thrown together when a vampire is brutally murdered. Damian is too depressed to care and ready to let the cops deal with it–Jamie-boy is willing to do some investigating on his own.

Then there’s Lucas, a vamp tramp with a Daybreaker’s tattoo on his neck. Whose side is he on? How many people is he willing to hurt to get what he wants?

Daybreak is book 5 in the Deadly Liaisons series, one that I’ve enjoyed quite a bit, and this entry didn’t disappoint. Where the first four books focused on the points of view of Jamie-boy and Damian, Daybreak also takes a look at things from the POV of newcomer Lucas. It gives a refreshing new voice and perspective to the series, seeing things from outside of Damian’s immediate influence, and giving us a closer look at the Daybreakers aka the anti-vampire group.

However, the MCs are still in control of some of the action, and for much of the story in a bit of a role reversal. Damian shows that even an older vampire can be pretty childish when hurt, drinking and sulking around his room, and seeing Jamie-boy briefly at a crime scene doesn’t help.

Then there is the normally shy and subservient Jamie-boy acting tough, going to investigate in hostile territory where he could get himself killed, and messing around with Lucas who he barely knows. He keeps himself busy and involved to show Damian that he can be of help without him, and to keep his mind off their uncertain relationship.

With the additional POV there weren’t a whole lot of surprises until the very end, but it still worked out pretty well. There was plenty of action, a solid amount of drama, and great character development. The ending leaves a lot of arcs up in the air, and that is the way I like it in this case. I can’t wait to find out what’s coming next! For anyone looking for some well written M/M I’d certainly recommend this series. As always, thanks for reading. ^.^

He Needs Discipline by Dominic Rod

Their relationship never felt normal. Jake and Dorian never quite bonded the way they were supposed to.

It made things a lot easier when little twenty-two year old Jake came to older Dorian for help with his out of control lifestyle, and Dorian’s solution was…taboo at best.Jake needs discipline. Dorian is more than happy to dish it out.

He Needs Discipline is another great find that I discovered over at Luna Erotica. Luna has become one of my go to sites when I am looking for something of the naughty variety, but also want something really well written, and it has yet to fail me.

There is plenty of M/F, and even F/F pairings in the world of erotica writing, but M/M is a bit harder to find. While this is short, as are most of the works from Luna, it will put you in just the right mood, and you don’t have to worry about it sounding like a fifth grader wrote it, something that happens far too often with this type of work.

The banter between the brothers is well done, the sex scenes and what might be considered foreplay is certainly exciting, and the stimulating aftermath isn’t shabby either. I’d definitely recommend giving it a shot, and if you like it check out what else LE has to offer. Thanks for reading and enjoy. 😉

Frodo’s Frisky Friday: The Beauty and the Beast by Leigh Wilder

The Beauty and the Beast

Even though Leigh Wilder is an auto-buy author for me that doesn’t mean even she is infallible, though she’s pretty close. The Beauty and the Beast is the first piece by her that I didn’t LOVE. For this short piece I’ll do a PRO vs CON list, are you ready?

The sex scene is pretty good. Wilder definitely has a special touch for creating the right amount of sexy tension during the act and I love every second. It’s steamy, it’s naughty and the back and forth in this piece was really well done. That struggle for control worked wonders.

The detail in the Beauty and the Beast is exquisite. Describing things many authors would forget such as the rose’s thorns are touches that elevate a piece like this. I also enjoyed the descriptions of the house which just sounds amazing. Pictures please? I don’t care if it is fictional!

The characters and I just don’t mesh. “Beast” or Nathan, whatever you would like to refer to him as, felt like a cluster of cliches rolled into one hulk of a guy. He’s really good looking, big and muscular and has that outer dom/inner softie combo going on. Sound familiar? As for Beauty/Kate it wasn’t much better. She did have a more robotic edge to her that I actually found myself liking, but at times she felt too contrived. She had a similar outer dom/inner softie thing going and it’s just…been done.

I didn’t feel the same spark during the build up to the sex scene. While much of it was forced by design you could really feel that quality in the way the book flowed. It was as if Wilder’s creative side was being held back and then when the sex scene came it was unleashed with the power of a typhoon. Maybe it was due to having to pay some homage to the original fairy tale in the beginning? I don’t know.

While the end result is a positive one there were notable flaws in the character originality and the story in the beginning just didn’t do it for me. The details and descriptions were great and the sex scene is, as always, Wilder’s shining moment. I liked it, but didn’t love it. Borderline three-Frodo piece but due to two major category flaws (which I describe in detail in my rating system explained page) it is a two. Still worth the read but my least favorite of her pieces thus far. Thanks as always for reading! ^.^