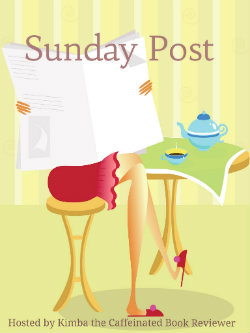 This begins my weekly posting of Sunday Post so that I can provide a recap of books I read, talk about what is coming up next week, and discuss any books I received in the past week.

Books I Received for Christmas

Reboot by Amy Tintera – I was on the fence for this one, but I liked the premise enough to put it on my list and I got it, sweet!

Resist by Sarah Crossan – I still need to read Breathe, but I have a good feeling about these books and was thrilled to see the pretty cover of Resist after I tore off the wrapping paper.

The Future of Us by Jay Asher – This was my gift to me because of how much I loved Thirteen Reasons Why, can’t wait!

Goals and Challenges for 2014 – Also includes my weekly schedule for this year!

Killing My Kindle: The Sorcerer’s Daughter by Larry Kollar – My first post on the new eBook feature!

Frodo’s Frisky Friday: Taken by the Centaurs by Celestia Dew – Things get a bit naughty and very humorous.

Book of the Week: Bang by Lisa McMann – Another new feature and me gushing like crazy!

The Sorcerer’s Daughter by Larry Kollar – 5/5 (Review above)

Catching Jordan by Miranda Kenneally – 3/5 – I thought this was pretty good but the MC kinda drove me nuts in the 2nd half.

The Forest of Hands and Teeth – 4/5 – Same thing with Catching Jordan except I liked the story and dialogue a LOT, the MC was just incredibly whiny and indecisive.

Fantasy Life by Matthew Berry – 5/5 – I enjoyed taking a break of fiction to read about fantasy football. Yes, that totally makes sense.

This Week on the Blog

Saturday – Book of the Week #2

It has been a pretty good start to the year! I’ve enjoyed all of the books I’ve read, I’m a tiny bit ahead, and with the readathon next week I should get even farther. Thanks for stopping by, feel free to leave a link to your Sunday Post or whatever other bookish meme you partake in over the weekend and I will be sure to check it out! Enjoy your Sunday! ^.^

Book of the Week: Bang by Lisa McMann

This week I’m gushing about: Bang by Lisa McMann

Jules should be happy. She saved a lot of people’s lives and she’s finally with Sawyer, pretty much the guy of her dreams. But the nightmare’s not over, because she somehow managed to pass the psycho vision stuff to Sawyer. Excellent.

Feeling responsible for what he’s going through and knowing that people’s lives are at stake, Jules is determined to help him figure it all out. But Sawyer’s vision is so awful he can barely describe it, much less make sense of it. All he can tell her is there’s a gun, and eleven ear-splitting shots. Bang.

Jules and Sawyer have to work out the details fast, because the visions are getting worse and that means only one thing: time is running out. But every clue they see takes them down the wrong path. If they can’t prevent the vision from happening, lives will be lost. And they may be among the casualties…

I’m officially in love with this series and Lisa McMann’s writing style. I’m already pining for Gasp, book three in the series, as I type this.

The banter between the family members (Jules – MC, Rowan – lil sis, Trey – older brother) and the love interest (Sawyer) is some of the best I’ve seen and I laughed almost to the point of tears throughout the book. The closeness that the siblings share is so touching and while it is explained quite clearly how they stay that way it still feels surreal at times.

Rowan is the best secondary character I’ve experienced in quite some time. She’s got attitude, she’s a darling little sister when she knows Jules needs it but uses it to her advantage when it suits her, and her witty remarks slay me every time. Trey manages to not be a cookie cutter older brother while still being there for Sawyer during the crap she has to go through. He’s her rock, but that doesn’t stop him from questioning some of the decisions she makes and calling her out when he thinks it’s necessary. He’s just a cool guy, someone you’d love to have as your best friend.

Then there is the romance between Jules and Sawyer and holy freaking crap if it isn’t the sweetest thing aaaaaaah.

They are so torn between having to deal with their family BS and wanting to be together and when Sawyer is dealing with the worst of the visions and all that goes with it…I melted into a puddle of happy goo by the way they helped each other. They both struggled so much, going through all kinds of ordeals, and even fights between themselves, but cared enough to talk it out and stay strong for each other. It wasn’t a “perfect” romance where everything just falls into place and that’s what made it so special and so REAL.

Oh and the STORY! There is action, and creepy vision-y things with a lot of mystery/amateur sleuthing going on which was so fun to read even during the rough parts (in the plot not the level of writing – to be clear). Plus SO MUCH DRAMA but like…the good kind, if that makes any sense at all. It all worked so well together and there was the perfect amount of tension and aaaaah so GOOD.

Well, now you know how I feel about Bang, and also this is a pretty good idea of what this feature will be like every week assuming I get at least one really good book/week which I think is highly likely. Thank you so much for reading and check out the Visions series if you haven’t already! ^.^