This week I took a stab at: Alexander Death by J.L. Bryan 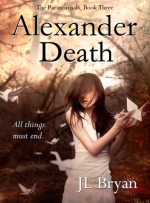 While Seth searches for Jenny, Dr. Heather Reynard of the CDC unravels Seth and Jenny’s secrets.

Alexander opens Jenny’s mind to her deep past, and to the full horrific extent of her powers.

Torn between her feelings for Alexander and Seth, and between her past lives and her present, Jenny must prepare to face her enemies, as well as the darkness within her…

Alexander Death is book three of The Paranormals series. The series is focused on a group of six entities that have a variety of powers, all of which have been residing in humans since the beginning of mankind, and that reincarnate after every death, though it varies as to how much of their past they remember each time.

In the last book Alexander was introduced, showcasing his power of controlling the dead. He swept away the impressionable Jenny, and in this book devises a way for her to remember their shared past. Jenny abandons Seth after catching him in an act of betrayal, and in this story she tries to figure out who she was, is, and wants to be.

I’ve enjoyed The Paranormals series for the most part thus far, and that remains true with Alexander Death. The range of emotions that Bryan can elicit from his characters is very impressive, and a big part of why the books work so well. I can always get a feel for what the various characters are thinking (he changes point of view a lot) even when they aren’t saying so outright. Often it is what they don’t say or do that is the most telling.

The displays of powers is also pretty cool, although they do achieve some pretty mundane things to go along with the miraculous, though I suppose that leads to more believability. While the characters are great, and the powers are always intriguing, it is the peeks back into history that I enjoy the most.

There are stories of different battles, major events, and great leaders, all of which are woven to be seen in a way where some of these entities could have been controlling things behind the scenes, or even right in front. The discussions of architecture, grand kingdoms, and the wide variety of ways that people can rule is fascinating.

There remains the issue, something I mentioned when I reviewed Tommy Nightmare, book two in the series, that Jenny tends to flip flop as to where her loyalties lie. This is one of my biggest pet peeves in any book, when a character has a set path and then they do a 180, so when it happened again I was pretty frustrated. Without any spoilers, let’s just say Jenny doesn’t really know what the heck she wants most of the time, usually following someone else’s lead, and this is the case in Alexander Death. It didn’t kill my enjoyment of the book, but it kept it from being as good as it could have been.

There is quite a bit of action in Alexander Death, from gun fights, to zombie attacks, and even involving some naughty scenes. The book has a bit of something for everyone. The romances are just as varied with power plays, love in its seemingly truest form, and pure lust. It doesn’t get too incredibly graphic, which makes sense since it is YA, but there are a few romps to be had.

Overall I thought Alexander Death was a pretty good book. If there had been just a bit more development spent on the transition that Jenny had towards the end that would have made it excellent, but alas it is not to be. I do recommend the series, beginning with Jenny Pox, and I look forward to reading Jenny Plague-Bringer (the fourth and final book) in the future. Thanks as always for reading.

This entry was posted on August 14, 2014 by frodosco. It was filed under Book Review, Killing My Kindle and was tagged with Alexander Death, eBook, J.L. Bryan, Jenny Pox, Killing My Kindle, The Paranormals, Tommy Nightmare.