Frodo’s Frisky Friday: Taken by the Centaurs by Celestia Dew 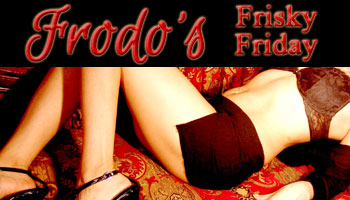 Taken by the Centaurs 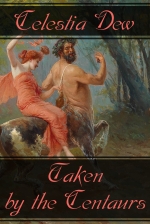 This is fantasy erotica of an adult nature.

Eleni thought she was desperately in love with Mikhail, the man her father refused to allow her to marry. The young lovers run off, determined to taste each others’ flesh at least once before she is forced to marry an older man. Alone at last, they are interrupted by a group of centaurs who steal away the pair. Back at the centaur’s camp Eleni learns some harsh truths about Mikhail, and some fantastic truths about her own body and what it can handle.

With this piece being so short at 16 pages, it seemed fitting that I do a mini review even though it isn’t Monday. If you read tales of the naughty variety, and even more so if you pay attention to some of the more…odd erotica that has appeared lately, then you likely have heard about the dinosaur erotica that has been discussed quite a bit. While this isn’t dinosaurs, or dragons, I’d say centaurs fall into a similar fantasy theme, especially that of rather large “members” and the throwing away of most logic when it comes to the sexual acts, something I am completely fine with.

Taken by the Centaurs is a great mix of hilarity and well written sexual scenes and I enjoyed the short story quite a bit. If you are in it for the steamyness this has plenty. If you want a goofy tale with mind bending sex, well that’s here too. The dialogue is great, the female MC is enjoyable, and the centaurs…well, they’re centaurs alright. One last thing of note is that the mythological aspects were done exceptionally well here, and for that I applaud Dew’s extra effort. Thanks as always for reading and if you want to check this out for yourself it is only 99c on Amazon here!