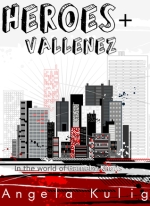 Victor Vallenez might not be a villain, but that doesn’t make him a saint. At age 16, Vic could be a career criminal, but instead he spends his time lurking in corners and telling other peoples’ secrets—for a price. As a professional snitch, money is the only thing that talks more than he does. Still, as much as Vic hates to admit it, there are some things even blood money won’t buy—mainly Emily. So, when her chivalrous butthead of a boyfriend shows up and asks for his help, there is one very good reason he won’t turn him down—and that’s his angle.

Heroes & Vallenez is an interesting and humorous short story, but one that I have a hard time categorizing. For one thing, the main character, Victor, does not seem to be at all like a teenage character, and had I not known that he was going in I would have though that he was an adult who happened to be a snitch. That doesn’t necessarily detract from the story, but as this is intended as more MG, not even YA, it throws me off a bit. Also, I don’t want to spoil the story, so suffice it to say there are some certain “unreal” elements that are thrust at you in the latter half. Those elements seem a bit forced, if you take them away completely I don’t know that you really lose any of the major plot points or developments that occur which makes me wonder if it is simply because it is an MG piece that Kulig thought they were necessary. Not sure.

I did enjoy the novella overall. It was an easy read and the ending certainly was interesting. The humor used was easily my favorite part of Heroes & Vellenez and from reading Kulig’s other works that comes as no surprise. There were things I might have changed or left out, but the piece worked, and a MG reader probably wouldn’t even pick up on the subtle ticks that I found which might mean they’d enjoy it even more. Try it out for yourself! Thanks as always for reading and come back tomorrow for Day 57!

This entry was posted on February 25, 2013 by frodosco. It was filed under Frodo's Hobbit Sized Reviews and was tagged with Angela Kulig, Goodreads 2013 Reading Challenge, Heroes & Vallenez, Middle Grade, Novella.